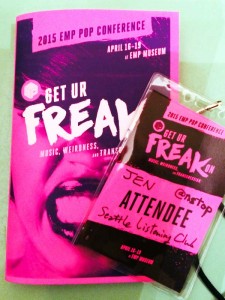 It’s the Christmas for music nerds this weekend in Seattle – and no, I’m not talking about Record Store Day. It’s the annual gathering of academics, rock critics and other lovers of musical minutiae otherwise known as Pop Conference. It started at the EMP back in 2002 and has circled back home (after a couple of multi-city tangents) for the past two years.

Pop Conference is an opportunity to meet up with old friends from out of town here to present or attend, and it’s a place where I can feel comfortable among my tribe even when meeting new people. You want to get into a spirited discussion about the lingering effects of 80s influences in mainstream musical trends even though the 20-year nostalgia cycle should dictate that mid-90s influences should be dominating? This is the place.

It’s also a chance to dive deep into musical topics far removed from your own zone of knowledge, led by each presenter, who has crafted a paper and talk about a hyper-specific subject connected in some way to the conference theme. (This year’s: “Get Ur Freak On: Music, Weirdness and Transgression”.) And the best presenters pull you down a tunnel into a highly-detailed, hyper-annotated and researched pocket of musical history, connecting you to the topic with their passion, presentation skills, and (typically) lots of funny anecdotes, pictures and/or musical interludes.

While I skipped the Thursday evening keynote panel and opening reception, I attended for most of the day on Friday, the first full day of sessions. And boy, was it frequently difficult to choose which ones to attend. There are always around four tracks happening simultaneously, and the layout of the EMP makes it hard to sample by wandering from some of the rooms to others.

That said, I’d already staked out my 9am pick, with talks by the always-entertaining and informative Robert Christgau and Andy Zax. So after meeting up with some friends in the EMP restaurant area and wolfing down a donut (mmm, maple-glazed old-fashioned) from the box proffered to me, I was ready to roll…

Robert Christgau, “Infectious Clowning: Huey Smith’s Rollicking Heyday and Long Sad Struggle to Get Paid”
I’ll confess that my coffee hadn’t quite kicked in soon enough for me to completely follow Christgau’s rat-a-tat-tat delivery of connections between Huey Smith’s musical clowning and New Orleans boogie-woogie. But we got a post-talk bonus round of stories as technical difficulties somewhat delayed the setup of the next presenter. One such tale included the detail about a house full of records burning down to the ground, which elicited an immediate, collective and surely involuntary groan from almost all in attendance.

Andy Zax, “‘Gee, It’s Nice To Be Alone’: How Rod McKuen Became America’s Best-Known—And Least-Understood!—Outsider Artist”
Andy Zax then took us into the world of much-maligned pop poet/song stylist Rod McKuen who, as Andy noted, was in his day as popular and widely-known as the Beatles. We were zipped along from his early beat poetry years – where I learned that Richard Hell most certainly ripped “Blank Generation” from Rod’s own “The Beat Generation” – through to mainstream TV success, ventures into psychedelia, disco, electronic bleep-bloop and… merchandising. Yes, there was a “Rod McKuen Casuals” clothing line. Zax punctuated his talk with some truly mind-blowing album covers (including this classic) song samples, and video clips. A poem about a cat? Apparently this was mainstream television fare in the late 60s.

Evelyn McDonnell, “‘The Hustle Never Stops’: The Survival of Kim Fowley”
Next up was Evelyn McDonnell, author of Runaways biography Queens of Noise with her exploration of infamous Runaways manager, and intensely weird person, Kim Fowley. Portrayed in the popular narrative of the Runaways story as a master manipulator and all-around bad guy, Fowley was given a nuanced – though appropriately rough-n-ready – appraisal by McDonnell. It was hard not to take away an appreciation for his hustle, in spite of the ick factor inherent in some of his shenanigans.

Devon Maloney, “Multimillionaire Pop Stars, They’re Just Like Us: Taylor Swift and the Performance of Normalcy”
Last up was Devon Maloney, who explored some of Taylor Swift’s efforts to show that multimillionaire pop stars can be “just like us.” Apparently Ms. Swift posts on fans’ Instagrams, bakes them cookies and sends them tea sets with personal notes attached. Huh.

Session 2: From Cock to Rock / Mad Men: The Strange Politics of Transnational Technologies

For the second session, I made a jump to another room at one point to catch the last talk there, navigating many flights of stairs and meandering tourists to do so. But I started with From Cock to Rock, in the Learning Labs.

Holly George-Warren, “Calamity Jane, Zelda Fitzgerald, and Bessie Smith: Janis Joplin and Her Transgressive Forebears”
Known to me through her biography of Alex Chilton (still on my to-read list), Holly George-Warren connected the dots between Janis Joplin and her stylistic forebears, at one point playing us a clip from the early 60s of Janis singing a Bessie Smith song, self-accompanied on autoharp, long before her Big Brother days.

Rob Drew, “The Blank Generation: Trans-Atlantic Transgressions of the Cassette in the Early 1980s”
I always thought it was weird that the first Bow Wow Wow album was an oddly-packaged cassette. Rob Drew explained why, along with how it came to be, and how transgressive the cassette was in the early 80s. I remember buying used LPs in the late 80s/early 90s with stickers still attached with slogans like “Home Taping Is Killing Music” without fully understanding what that was all about. Answer: pirating! Those C-30, C-60, C-90 (go!) blank tapes scared the record industry. And therefore that was a cause for punks to take up.

And then we break! Time for me and a friend to refuel with greasy diner food – and jukebox selections: Jesus and Mary Chain, the Wipers – at the 5 Spot.

Session 3: When They Did That / Voicing Transgression

Jack Hamilton, “Reggae and Shout: Doing Over the Beatles in the Jamaican 1960s”
Another topic that I was completely unfamiliar with prior to this talk, but came away from completely intrigued. Jack Hamilton opened with a clip of a 20-year-old Bob Marley singing a Beatles song, going on to explain – and demonstrate – how completely normal this Jamaican/British intermingling of song and influence was in the 60s. He then played examples of a number of other Beatles “do overs” (Jamaican pop music parlance for covers) that were so charming that I’d like the compilation album now, please!

Michaelangelo Matos, “Sleeping in Between the Two of Us: ‘When You Were Mine’”
Prince expert, electronic music smartie, and class-A presenter Michaelangelo Matos gave us a look into not just the genesis of this key track from Prince’s Dirty Mind album, but the larger context surrounding it: from the sniping with then-tourmate Rick James to the conservative pop and black radio music landscape into which it landed. Fave quote, Rick James on Prince, calling him a “little science fiction creep.”

Tom Kipp, “From the Old Chisholm Trail to the Nearest Circle K and from Actionable Offenses to Metallic K.O.: Exploring ‘The Filthy Song’ in Recorded Music!”
With his genteel appearance, including a nice shirt and tie, you’d have never guessed that Tom Kipp was about to unleash a filthy, filthy torrent of song onto us… and perhaps on some of the kids, families and other museum-goers just outside our open-air/no-real-walls session space. Exploring songs with lyrical content not just dirty, but gleefully so, Tom played a high-volume musical montage of highlights including “Cocksucker Blues” and the Marianne Faithfull classic “Why D’ya Do It?” before launching into his own teenage band’s lo-fi, expletive-filled song about exploits in and around a Circle K. The best part, though, was one question in the Q&A after the panel, which went something like this:

Audience member: "I have to ask: what were you on when you wrote/recorded that song?"

Tom: "I was 18, a virgin, and had never smoked, drank or snorted anything before."

Audience member: "That makes it even better!"

Even though there was another set of sessions to follow, post-diner food coma caused me to retreat. After all, the weekend has just begun.